In the study: 10 Steps to Improve Major Gift Fundraising, one of the key lessons learnt was that donor retention is more important than acquisition. Heather Joslyn goes on to explain in her article Cultivating Former Donors Helps Small Charities Raise Major Gifts how stewarding their big-gift donors pays off more than soliciting new prospects.

Josyln writes: Surveying charities with less than $10 million in donated annual income to find out which factors enhance major-gifts fundraising, researchers found the groups lost an average of $300 for every prospective major donor solicited. By contrast, the organizations raised an average of $2,200 for every existing major donor they were stewarding.

The takeaway, says Amy Eisenstein, a co-author of the study: Small nonprofits need to pay more attention to quality, not quantity, when cultivating donors.

“It’s important for organizations to understand that building their acquisition pipeline is an investment,” with the payoff often far down the road, says Ms. Eisenstein. “While we wouldn’t want to say that organizations should ignore the major-gift acquisition pipeline, they need to carefully choose who goes into that pipeline and, at the same time, they need to be paying a lot of attention to stewarding and cultivating repeat donors.” 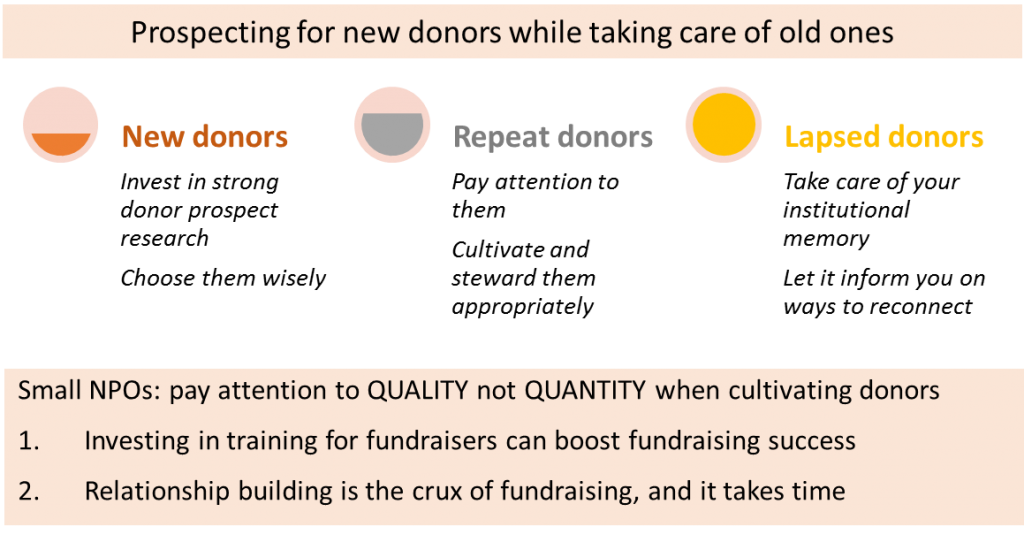 The study, she says, points to the importance of strong donor prospect research, an area that small charities traditionally don’t invest in heavily. “You can’t have 100 people in your pipeline, because it will cost you too much money, and you can’t pay attention to them well.”

Ms. Eisenstein, author of the book Major Gift Fundraising for Small Shops, conducted the study with Adrian Sargeant, director of the Centre for Sustainable Philanthropy at Britain’s Plymouth University, and Rita Kottasz, a research consultant to the center. They surveyed 662 organizations that generated income of under $10 million. Just over half the groups raise less than $1 million annually.

The researchers found no evidence that any particular measurement, such as tracking dollars raised or solicitations made, was linked to overall fundraising success. However, professional development for fundraisers did help, with the strongest links found at organizations that sent staff members to major conferences or supported study in formal fundraising courses or credential work like the Certified Fund Raising Executive, or CFRE.

Yet these types of training appear to be offered sparingly. The study found that only 11 percent of groups supported formal coursework (such as through a local university), though 56 percent said they provide workers with online training and webinars.

Major-gift officers or development directors, the researchers found, raised an additional $37,000, on average, for every additional form of training acquired. Even taking a webinar helped, Ms. Eisenstein says.

“We’ve been saying forever that fundraising is about relationships,” says Ms. Eisenstein. “This points directly to the strength of relationship-building over time.”

She added that it all builds to a case in favor of retaining top fundraising talent. “If an executive director has a development director that they like, they need to do almost anything in their power to keep them. And I think that includes paying for training and for educational opportunities.”

AMONG THE STUDY’S OTHER FINDINGS:

Charities have varying definitions of “major gift.” For groups in the survey raising major gifts, the average donation was $24,555, while the median gift was $5,000.

Major gifts made up an average of just under 14 percent of respondents’ overall donated revenue.

On a scale of one to 10, with 10 indicating strong agreement, organizations gave an average of 4.3 to this statement: “I regularly receive information on potential donors from others in the organization.”

This articles was first published in The Chronicle of Philanthropy on 4 November 2015 and republished on this site with permissions. Click here to access the original article.

Heather Joslyn: The Chronicle of Philanthropy