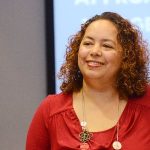 Desiree Paulsen is an independent Organisational Development Practitioner and Facilitator. She was a teacher and lectured at a college of education, from where she crossed over into the non-profit and development sector in 1994 and worked in various positions as community developer, field worker, trainer/facilitator, materials developer, training co-ordinator and programme manager. These positions were held in local South African NGOs in the areas of: early childhood development; whole school development; entrepreneurship and business development; civic education and training, organisational development and capacity building for community-based organisations. She also worked for the Community Development Resource Association (CDRA), and has built her practice as an organisational development consultant and development practitioner. Until the end of 2011, she was also part of the CDRA leadership team with a specific focus as director for organisational well-being. Desiree is now working as a freelancer and remains an associate for CDRA. Desiree has an Advanced Diploma and a Master’s degree in Adult Education, Training and Development.

1. How long have you worked in the non-profit space?

2. What are the most significant changes you’ve observed in that time? Please share with us the good, the bad and the ugly.

The NGO sector has always been a volatile and fluid sector as we are dealing with issues that are hugely complex and ever changing. Yet at the same time it is amazing how stable the NGO sector is with many NGOs having been around for decades. There is constant movement and change and currently many organisations are facing huge identity crisis and having to examine their ways of being and operating in the world. Because the sector will always remain funder driven the role of the funder has also changed and the relationship with funders have had to be explored in new and different ways – funders and donors are wanting new and different things – sometimes there are trends and fads and fashions where organisations fall into the trap of following funder needs instead of their own purpose. As a result many NGO are currently closing or downsizing due to lack of funding and lack of understanding of purpose and this is a sad but yet natural sign of the times we are living in also showing the stark reality of where the sector needs to change and put its energy. Because of the changing landscape of uncertainty, NGOs are working together more now than before as they have realised that unity is strength and also they need to complement each other’s services rather than compete against each other. There is much more collaboration and partnership as NGOs have realised that they can be of more service to those they serve if they are working alongside others and each offering their own unique contribution. European Funders have dwindled, and now there is more dependence on South African and other sources of funding – new funding sources are opening up and NGOs have thus have to find ways of operating in new funding landscapes. The leadership demographic is slowly changing from being led by mainly white men and women, to being led by black mostly women and fewer men. In organisations power has also shifted from mainly white leadership and boards to more integrated and diverse leadership in organisations. The issues of diversity and power have become very contested and explosive and most organisations do not know how to work with issues of diversity and power – as a result there is large staff turnover in many NGOs as well as a loss of black leadership to other sectors like government or business. Diversity and power issues often cause fragmentation and disintegration of many NGOs.

3. How do you maintain a work-life balance?

I am currently working independently which means I have a much better balance than before – so when I am home with my family I am completely absorbed in my home life and when I work I am completely absorbed in work! I believe in working hard and playing hard and this helps with balance. I think that in the past women have had to work too hard to prove themselves in the workplace – my philosophy has always been to integrate the two and not give one up for the other, so I have been very fortunate to work in NGOs that were family friendly and understood that as a working mother sometimes you need to have flexible working times, and also for me I never separated the two but tried to integrate them in ways that worked – but now that I freelance, that is no longer an issue.

4. In your Advancement work, what sources of information are you constantly referring to or recommending?

I draw a lot from the work of my fellow practitioners at CDRA www.cdra.org.za – who have pioneered an approach that is developmental. The writings in the annual reports and other articles have attempted to make sense of a sector that is hugely complex and often contradictory – all of these writings were written out of actual experience with organisations in the NGO sector. I constantly refer to the work of Margaret Wheatley http://margaretwheatley.com/ as she has been one of the foremost thinkers in relation to seeing organisations as living systems – her work and her approach includes systems thinking, theories of change, chaos theory, leadership and learning organisation. Her books – A Simpler Way, Finding our Way (Leadership for an Uncertain Time) have been constant companions during my periods as part of the leadership of an organisation, or when I had to provide organisational development support and facilitation to organisations facing crisis. I also draw a lot from the work of Stephen Schuitervoerder who is one of the leading facilitators in the field of diversity www.processconsulting.org – I have been very fortunate to receive training from him in process work and world work which is a practical and profound approach to working with diversity and power in groups and organisations.

5. What do you wish you had known when you started working in Advancement?

I wish I had known that organisations are organic, complex living systems that cannot be controlled. That one has to work with and nurture emergence and principles of self-organisation if you would like to see change, growth and development in any organisational system. I wish I had known that contradiction is part of complexity and that one has to live with the principles of [both/and] rather than an [either/or] approach – this means embracing complexity and working with it (including working with crisis as a natural phenomenon).